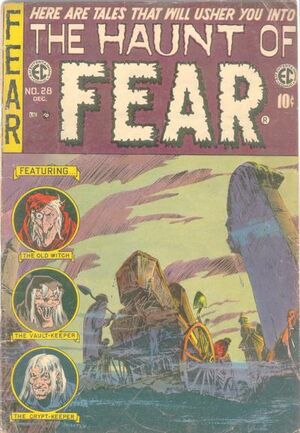 1 of 3
Add photo
A man in an adulterous relationship deals with the guilt of his mistresses' suicide by campaigning against all forms of public affection until he finally has a law passed requiring separate cemeteries for men and women. The good women will not stand for this however, and they unbury themselves during the night to rebury themselves next to their mates. At first he doesn't believe the gravedigger when he relates what is happening so he stays in the cemetery at night and observes them rise. His former mistress drags him back into her grave.

This story is told by the skull of a sadistic animal trapper in Africa who traps animals only in order to inflict pain on them before he kills them. One day he falls victim to one of his own pit traps and as various sorts of animals gather round, the ants strip his flesh clean.

1 of 5
Add photo
One girl so desperately wants to be in Phil Vitale's all-girl orchestra that she is willing to kill herself so he gives her a lethal injection that makes her into a zombie. She assumes that they are all zombies and she doesn't care because she still wants to be in the band, and in a way, she gets her wish as they turn out to be Phil Vitale's all-ghoul orchestra.

Appearing in "A Work of Art!"Edit

Synopsis for "A Work of Art!"Edit

A man is so unsatisfied with the commercial attitudes of his fellow morticians, including that of the son-in-law he fruitlessly tried to impart a sense of art, that he builds his own robot mortician to euthanize him and do a job he himself would be proud of.

Retrieved from "https://heykidscomics.fandom.com/wiki/Haunt_of_Fear_Vol_1_28?oldid=108201"
Community content is available under CC-BY-SA unless otherwise noted.