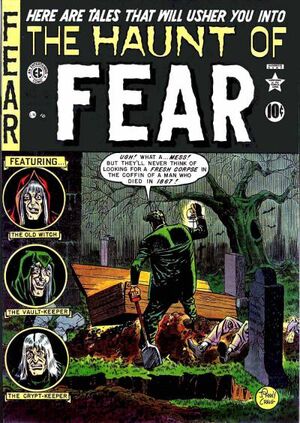 Appearing in "A Biting Finish!"Edit

Synopsis for "A Biting Finish!"Edit

A man murders his rival and buries his body in the grave of someone who died in 1867. When he confesses in his sleep, his new wife confronts him and he murders both her and the maid. With police on his heels he takes to an underground tunnel system that passes through the old graveyard. A coffin obstructs his path and he smashes an opening into it to reach inside and pry it out of the way. The corpse inside bites down hard on his hand causing him to bleed to death. As life fades, he notices the name plate on the coffin is the same one that he disposed of the body of his rival.

Appearing in "Horror in the Freak Tent!"Edit

Synopsis for "Horror in the Freak Tent!"Edit

1 of 4
Add photo
Enraged, a freak show owner blinds the carnival's knife thrower with red-hot pokers. The other freaks get revenge by gagging the owner, strapping him to the board and guiding the thrower's tosses with their comments.

Appearing in "A Tasty Morsel!"Edit

Synopsis for "A Tasty Morsel!"Edit

You pull into the End of the Road Inn and proceed to have a dream that you become the victim of a vampiric innkeeper who ties his victims upon a slab to slash their wrists and collect their blood in a bowl. Upon awakening you realize you got one detail wrong as you are indeed tied upon a slab as the innkeeper expresses indignation at being referred to as a vampire. He proclaims he is a ghoul as he advances upon you with meat cleaver held high.

Appearing in "Seeds of Death!"Edit

Synopsis for "Seeds of Death!"Edit

A farmer's wife and the hired hand are having an affair so the farmer kills the hand one evening and buries him along with some flower seeds he had purchased that day in the field. His wife grows concerned and leaves for the city to inquire with the hired hand's relatives. Enraged, the farmer catches up with his wife in an alley and threatens her with violence. She clouts him with a lead pipe and stuffs him into a garbage can which the sanitation workers load into the compacter truck. When the wife returns to the farm through the field she comes across the newly sprouted flowers and realizes what must have happened.

Retrieved from "https://heykidscomics.fandom.com/wiki/Haunt_of_Fear_Vol_1_5?oldid=108178"
Community content is available under CC-BY-SA unless otherwise noted.