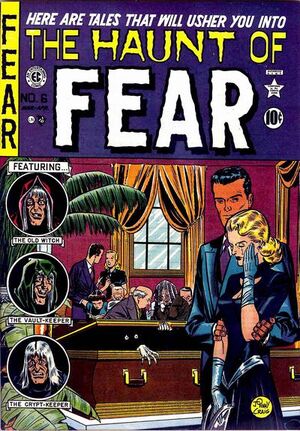 Appearing in "A Strange Undertaking..."Edit

Synopsis for "A Strange Undertaking..."Edit

1 of 4
Add photo
Ezra Deepley is an undertaker who feels he has suffered injustice at the hands of influential town citizens so when they die during an epidemic of disease, Ezra takes advantage of the situation to revenge himself upon their corpses.

Appearing in "So They Finally Pinned You Down!"Edit

Synopsis for "So They Finally Pinned You Down!"Edit

A drifter is 'turned' by a vampire. He doesn't understand this strange new condition and powerful urges so he attempts to track the woman down. He continually feels that he has found her at last only to realize his mistake when he has slaked his blood thirst upon his latest victim. Eventually the citizens discover his hiding place and pound a stake through his heart and he dies without ever fully comprehending what has happened to him.

Appearing in "A Grave Gag!"Edit

Synopsis for "A Grave Gag!"Edit

An unpopular family member with a penchant for playing practical jokes on the occasion of family member's funerals outsmarts himself when he takes the place of his brother's dead wife in her coffin and the family refuse to view his screams as anything but another gag, thus burying him alive.

The owner of a cheese factory murders his partner by shoving him into a cheese vat in order to avoid sharing the profits. He dreams of being pursued by glowing cat's eyes and crawls across a mouse trap baited with cheese from which dangle the hands of his partner.

Retrieved from "https://heykidscomics.fandom.com/wiki/Haunt_of_Fear_Vol_1_6?oldid=108179"
Community content is available under CC-BY-SA unless otherwise noted.