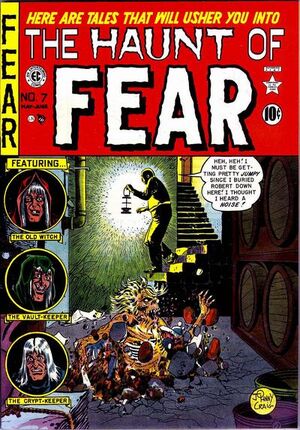 Appearing in "Room for One More!"Edit

Synopsis for "Room for One More!"Edit

Young Rodney Whitman loses his parents in an automobile accident and goes to live with relatives. When he reaches twenty he realizes there is only one spot left in the family crypt and wishes to secure it for himself, thus he murders his three living relatives and disposes of their bodies in the swamp, lake, and cellar. The zombies return, dismember Rodney, and claim the remaining casket for themselves.

1 of 4
Add photo
A man born with two heads carries a basket around on his shoulder to prevent others from knowing of his condition. One of the heads is homicidal and when it begins to seize control, the good head opts for suicide.

Appearing in "Horror in the Schoolroom"Edit

Synopsis for "Horror in the Schoolroom"Edit

Andy's friend Magog devours Andy's teacher after he hits Andy with a switch.

Appearing in "The Howling Banshee!"Edit

Synopsis for "The Howling Banshee!"Edit

A man with a gangster past flees to Ireland and engages a woman who claims a Banshee wails when one of her kin is about to die. The gangsters catch up with him, but he survives several attempts on his life until his wedding night when he lunges out into thick fog in an effort to kill the gangsters but ends up accidentally shooting his new bride. He can now hear the wail of the Banshee as he realizes he is about to die, either as a victim of the gangsters or for the murder of his wife.

Retrieved from "https://heykidscomics.fandom.com/wiki/Haunt_of_Fear_Vol_1_7?oldid=108180"
Community content is available under CC-BY-SA unless otherwise noted.