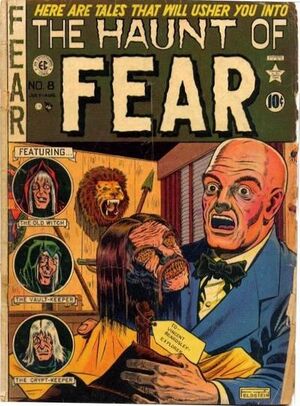 Appearing in "Hounded to Death!"Edit

Synopsis for "Hounded to Death!"Edit

A man who keeps hounds starving for the foxhunt catches another guy making time with his wife. The wife tells him to pretend he's had a heart attack so the husband will dump his body down the road, but instead, since the husband is wise to them, he tosses the body into the dog kennel where it is ripped to shreds. The corpse returns to take revenge upon the husband.

Appearing in "A Very Strange Mummy!"Edit

Synopsis for "A Very Strange Mummy!"Edit

1 of 4
Add photo
Explorers discover a vampire entombed as a mummy. They stake it.

A man sets up a deal with the Jivaro head-hunter tribe to exchange his duped victims for large uncut diamonds. After his fourth victim is dispatched this way he receives a package at his doorstep. Upon opening the package he is terrified to see that it is the shrunken head of his last dupe. The head opens its eyes and glares at him. He drops the package and the head rolls free and attaches its teeth into his ankles, tripping him. Then the head tears his throat out.

Appearing in "The Irony of Death!"Edit

Synopsis for "The Irony of Death!"Edit

A man tosses his steel mill boss into the vat after marrying the bosses' daughter thus inheriting the mill. Two of the ingots get made into an iron maiden for a museum exhibit and when he tries it out for size, it slams shut on him.

Retrieved from "https://heykidscomics.fandom.com/wiki/Haunt_of_Fear_Vol_1_8?oldid=108181"
Community content is available under CC-BY-SA unless otherwise noted.