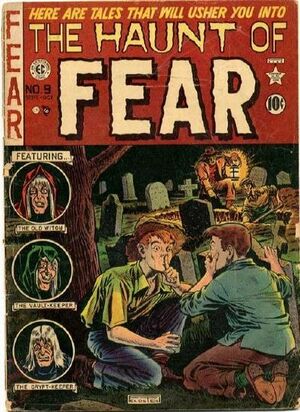 Appearing in "Warts So Horrible?"Edit

Synopsis for "Warts So Horrible?"Edit

Two nephews attempt to grave rob their miser uncle at midnight for a diamond ring that he had buried with him. The corpse seizes them and re-buries all with two young boys in the cemetery as witnesses who had been attempting a witchcraft spell for wart removal.

1 of 4
Add photo
Two passengers from a downed plane wash up on an island where the only food appears to be fruit that grows on a tree enclosed behind a stockade. The previous occupant tells them from behind the wall that eating the fruit will make their skin rot off, but they don't believe he is sane and so come back to the enclosure later that night and partake of the fruit, but then they get a look at him...

Appearing in "The Age-Old Story"Edit

Synopsis for "The Age-Old Story"Edit

A young woman marries a biologist in his 50s for his money but quickly tires of him. She gets him to fork over all his dough and then tells him she's leaving him for a younger man. He proposes a farewell toast and, unbeknown to her, spikes her drink with an aging hormone that turns her into a withered old crone.

Appearing in "The Gorilla's Paw!"Edit

Synopsis for "The Gorilla's Paw!"Edit

"I wish I had your brains!"

Retrieved from "https://heykidscomics.fandom.com/wiki/Haunt_of_Fear_Vol_1_9?oldid=108182"
Community content is available under CC-BY-SA unless otherwise noted.