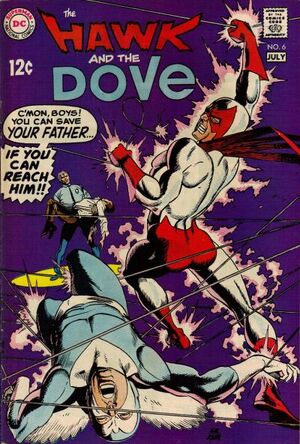 Appearing in "Judgment in a Small, Dark Place!"Edit

Synopsis for "Judgment in a Small, Dark Place!"Edit

A man named Arthur MacArthur discovers that his father, Karl, a longtime inmate, has died in prison. Arthur seeks revenge against the judge who incarcerated his father, Irwin Hall. Posing as a gardener, he sneaks into Irwin's home and kidnaps him. Hank and Don Hall transform into their super-hero guises as Hawk and Dove and pursue separate avenues of investigation. They eventually track Arthur MacArthur down and struggle to navigate through various traps, including a network of electrified pipes. They eventually apprehend MacArthur and rescue Irwin Hall. Despite the valiant display of heroism the boys displayed, Irwin Hall still condemns their illegal vigilante tactics.

Retrieved from "https://heykidscomics.fandom.com/wiki/Hawk_and_Dove_Vol_1_6?oldid=1431278"
Community content is available under CC-BY-SA unless otherwise noted.