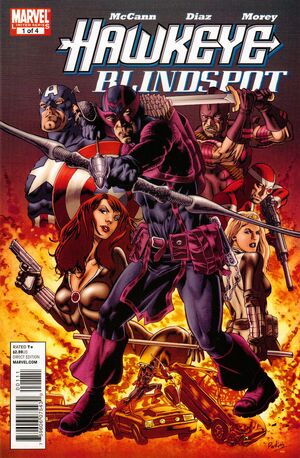 Get it here: the past, present and future of the world’s greatest archer set to star in the upcoming Marvel Studios’ The Avengers movie! Hawkeye is left blindsided after the events of WIDOWMAKER, with a new vision of the world around him and, in order to move forward with his new life, he must first re-examine how it all began. All new era for the Avenging Archer begins here, as writer Jim McCann (Widowmaker, Return Of The Dapper Men) brings you a Clint Barton you’ve never seen before!

Retrieved from "https://heykidscomics.fandom.com/wiki/Hawkeye:_Blind_Spot_Vol_1_1?oldid=1653365"
Community content is available under CC-BY-SA unless otherwise noted.