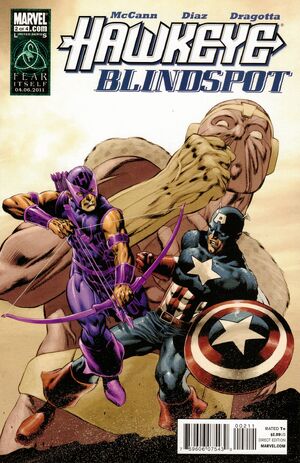 A hero lays dead at Hawkeye's feet, the villain pulling the strings is revealed, but the true master plan--and what major change it means for Hawkeye's life--is still to come! Can Hawkeye trust his eyes? To face his foes, Hawkeye will need to go back to his roots and fight...Captain America?! The defining chapter of the Avenging Archer continues!

Retrieved from "https://heykidscomics.fandom.com/wiki/Hawkeye:_Blind_Spot_Vol_1_2?oldid=1652926"
Community content is available under CC-BY-SA unless otherwise noted.