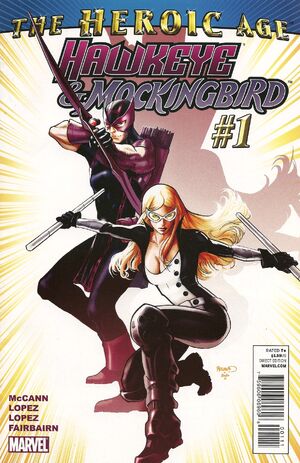 Hawkeye, the world’s greatest marksman is back—and reunited with the world's most dangerous super-spy, Mockingbird—in an all-new ongoing series! The deadly duo defied every obstacle to make their way back to each other and put together the all new WCA team—but now the one thing that divided them years before has returned to haunt them: the Phantom Rider! This ancient enemy is out to destroy all our heroes hold dear, and is teaming with Clint Barton’s arch-nemesis, the obsessed assassin Crossfire, to do it! Writer Jim McCann and penciler David Lopez, the team behind the acclaimed New Avengers: The Reunion, reunite to aim the spotlight and crosshairs on Marvel’s terrorist-targeting tandem, delivering a monthly dose of classic threats, new enemies, shocking allies, unexpected twists and dysfunctional dynamics in the Mighty Marvel Manner!

Retrieved from "https://heykidscomics.fandom.com/wiki/Hawkeye_%26_Mockingbird_Vol_1_1?oldid=1657713"
Community content is available under CC-BY-SA unless otherwise noted.