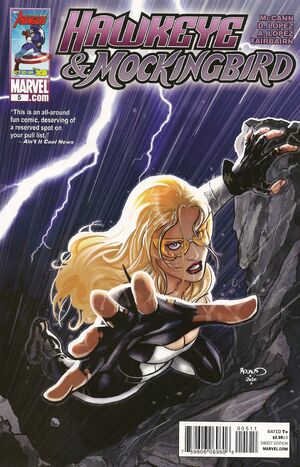 This is it, the climactic battle you've been waiting for! They've been pushed, beaten, and nearly killed—now Hawkeye & Mockingbird face off against their personal arch-nemesis, Crossfire and the all-new Phantom Rider, in no-holds barred combat! Plus: a shock ending that affects...everything! Join the action, drama, romance and thrills and find out why ComicBookResources.com says it “keeps up the high standard already set by Avengers and Secret Avengers...This series deserves a long and entertaining run.”

Retrieved from "https://heykidscomics.fandom.com/wiki/Hawkeye_%26_Mockingbird_Vol_1_5?oldid=1657714"
Community content is available under CC-BY-SA unless otherwise noted.