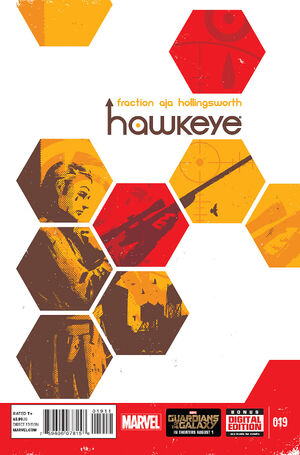 Appearing in "The Stuff What Don't Get Spoke"Edit

• The sense-shattering fallout of the Clint vs. the Clown -- Clint Barton has been deafened!

• With the Barton Brothers this battered and bloodied, surely they’ll make easy pickins for the Bros, right? Bro? Seriously?

• If we do our jobs right THIS time, this issue will be the Dog Issue of Sign Language issues.

Retrieved from "https://heykidscomics.fandom.com/wiki/Hawkeye_Vol_4_19?oldid=1724702"
Community content is available under CC-BY-SA unless otherwise noted.