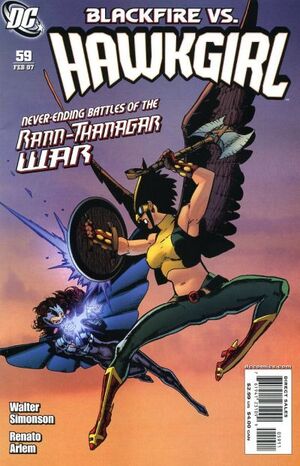 Appearing in "Relic of War"Edit

Synopsis for "Relic of War"Edit

Kendra and Inspector Doucette enjoy an afternoon meal at Le Lion D'or in St. Roch. A man rushes in and tries to hold the place up, but Kendra disables him with a well-thrown serving tray. After the meal, Kendra and the Inspector part company and she returns home to the Stonechat museum. She reflects upon all of the craziness that has erupted in her life recently, and her mind drifts back to events that took place during the Rann-Thanagar War.

The following day, Danny Evans and she are inspecting several new exhibition pieces. She discovers a Canopic jar excavated from the tomb of Hath-Set (the priest who murdered the Hawks in their previous lives). Inside the jar is a Thanagarian Testament Pod.

Realizing that remnants of the Rann-Thanagar War will soon return to haunt her, she telephones Batman in the hopes of upgrading her armament. Batman refers her to a retired weapons-dealer living in St. Roch called the Mole. Kendra visits the Mole, who supplies her with a specially designed dart gun.

Meanwhile, the Tamaranean warlord, Blackfire, arrives on Earth. Seeking to destroy anything and everything remotely related to Thanagar, she seeks out Kendra Saunders. Hawkgirl and Blackfire battle one another in the skies over St. Roch. Born aloft upon Carter's old Nth Metal wings, Blackfire unleashes a volley of Starbolts, incapacitating Hawkgirl.

Retrieved from "https://heykidscomics.fandom.com/wiki/Hawkgirl_Vol_1_59?oldid=1431335"
Community content is available under CC-BY-SA unless otherwise noted.