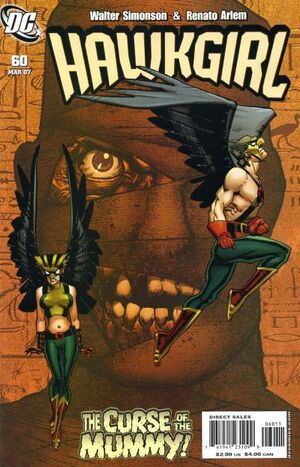 Death is close by, Kendra, ready to reach out and touch you both! Be careful. Remember the past lives of the Hawks!

Appearing in "A Cast of Hawks"Edit

Synopsis for "A Cast of Hawks"Edit


At the Temple of Isis, the followers of ruler Hath-Set capture a "demon" from Apokolips. The demon attempts to barter for his life by offering Hath-Set an ancient weapon. Hath-Set kills the demon and encases the alien artifact inside of a Canopic jar.

Rann
The Present
After defeating the threat of the Tamaranean dictator Blackfire, Hawkman and Hawkgirl converse with Alanna Strange. Alanna uses Zeta-Beam technology to return the Hawks to Earth.

St. Roch, Louisiana
The Present
The Hawks arrive on the steps of the Stonechat Museum. Hawkgirl is still bothered by the fact that Carter made little effort to keep in touch during the year that he spent on Rann. Hath-Set meanwhile, has been reincarnated into the body of a young girl, and skulks about the museum seeking the ancient alien artifact. Danny Evans hears Hath-Set sneaking about and sets off an alarm. Hawkman flies off in response to the alarm, but Kendra is distracted by something else.

The spirit of her past incarnation, Shiera Sanders appears before her. She warns Kendra that death is nearby and that she must "break the pattern". Kendra presses Shiera for more information but the spirit disappears.

Inside the museum, Hath-Set finds the urn containing the weapon and snatches it. Hawkman and Danny Evans give chase, but Hath-Set's young female body runs out into the street where she is struck by a police car. The driver is Hawkgirl's new friend, Henri Doucette. The streets are cleared, but the device is missing.

That evening, Kendra has a long conversation with Carter. Carter is not happy with her recent dalliance with Henri Doucette, but Kendra knows that if Carter and she remain together, then they are fated to die.

Later, the alien artifact activates, and transforms into a robotic arachnid creature.

Retrieved from "https://heykidscomics.fandom.com/wiki/Hawkgirl_Vol_1_60?oldid=1431336"
Community content is available under CC-BY-SA unless otherwise noted.