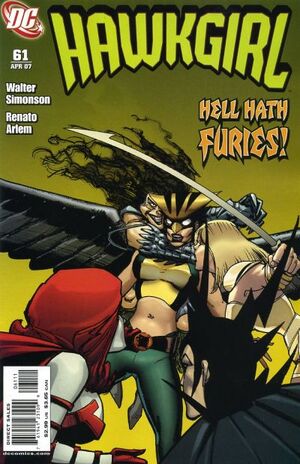 The fruit of another of the crackbrained stupidities of my idiot brother, DeSaad. Why in the name of the Firepits Darkseid keeps reviving that fool, I'll never know!

Appearing in "Weapon of Choice"Edit

Synopsis for "Weapon of Choice"Edit

On an Apokoliptian space station, several Parademons argue over a misplaced Beta-3 Gizmoid. They manage to track it back towards Earth. Bernadeth of the Female Furies overhears the conversation and executes them. She gathers the rest of the Furies together and travels towards Earth. En route, she tells them that a rogue Parademon stole the Gizmoid 3,500 years ago and brought it to Earth where he attempted to barter it to an Egyptian Prince.

At the Stonechat Museum, Kendra tries to throw herself into her work, but she is frustrated over difficulties involving her relationship with Carter. Danny tries to comfort her, but Kendra decides to take a break and get some fresh air.

She goes to see the Mole at the Down by the Levee Retirement Community. The Mole outfits her with even more hi-tech weaponry. Though she is unaware of its presence, the Gizmoid has been secretly tracking her actions.

The Female Furies arrive in St. Roch and track down the Gizmoid. The machine reacts defensively and keeps the Furies at bay with a burst of gas. Hawkgirl swoops down and the machine attaches itself to her. It begins growing, spreading across her body, taking complete control over her. By the time it is through, the Beta-3 completely coats Kendra in alien armor.

Retrieved from "https://heykidscomics.fandom.com/wiki/Hawkgirl_Vol_1_61?oldid=1431337"
Community content is available under CC-BY-SA unless otherwise noted.