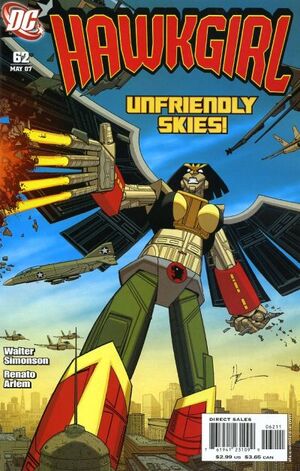 So damn it all, Hawkgirl is going to kick some serious ass!

The Beta-3 Gizmoid reformats itself and assumes a form similar to that of Hawkgirl. It brings its weapons systems online and prepares to destroy all life within its target sphere. The Female Furies know that Darkseid has great interest in this planet, and would likely frown upon seeing it destroyed without his authorization. They fly off to engage the Gizmoid.

Hawkgirl meanwhile, revives and discovers that her Nth metal wings are missing. Danny Evans rushes up to her just in time to witness Hawkgirl spontaneously sprouting a unique pair of reptilian wings. In addition, a gold sheathe of body armor begins to grow until it emcompasses her entire body. Kendra has no idea why any of this is happening, but she feels energized and flies off to confront the Gizmoid.

Hawkgirl finds the Furies fighting the Gizmoid. Bloody Mary spies her, and believing Kendra to be a free meal, sneaks up behind her. Instinctively, Hawkgirl's wings lash out, slicing Bloody Mary across the throat. Kendra is just as surprised as Mary at the wings' reactions.

Leaving Mary behind, Hawkgirl addresses Bernadeth and together they establish a new battle strategy. Combining their efforts, they succeed in decapitating the construct, forcing it to shut down.

With the Gizmoid destroyed, Hawkgirl's wings and armor recede and she plummets to the ground. Bloody Mary decides to exact revenge upon her, and prepares to bite her once again. This time, it is Danny Evans who stops Bloody Mary's attack, by bashing her across the back of the head with a block of wood. Hawkgirl finishes her off with an electric charge from her dart gun.

Bernadeth compliments Hawkgirl on her battle savvy, and considers her a sister warrior. The Furies gather up the remains of the Gizmoid and fly back to Apokolips.

Retrieved from "https://heykidscomics.fandom.com/wiki/Hawkgirl_Vol_1_62?oldid=1431338"
Community content is available under CC-BY-SA unless otherwise noted.