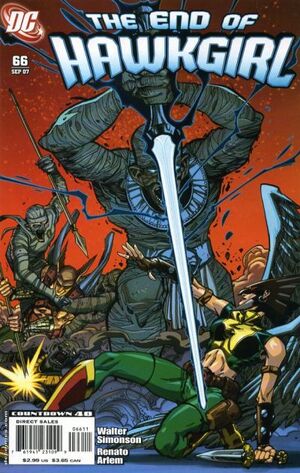 Damnation to you, Hath-Set... for all eternity... until the end of time! Give our regards... to Osiris.

Appearing in "Dead or Undead!"Edit

Synopsis for "Dead or Undead!"Edit

Hath-Set viciously advances against Hawkgirl, but she manages to deflect each of his sword thrusts. To the surprise of both of them, the consciousness of Chay-Ara becomes dominant in Hawkgirl's body, and she uses her knowledge of Hath-Set to give herself an advantage. Hawkgirl picks up a sword and the two continue fighting.

Hawkman meanwhile, is still trapped in a lower dungeon with Hath-Set's mummified sons. He bashes one against the stone wall and impales the other with a spear.

Kendra meanwhile gets the upper hand and manages to sever Hath-Set's sword arm. Hath-Set channels the ka energy of his sons to reconstitute his missing limb. Hath-Set tells Hawkgirl that she will become the mother of a restored royal bloodline.

Hawkman overhears the conversation up above and uses a torch to destroy the mummies, so that Hath-Set can no longer draw upon their power. He then breaks free and flies up to help Kendra. He hurls his spear at Hath-Set, sending it passing through his skull. Hawkgirl finishes him off by slicing Hath-Set in twain down the middle.

With the threat of Hath-Set finally over, the spirit of Chay-Ara (and by extension, Shiera Hall) is no longer needed. She gives a parting kiss to Carter, then abandons Kendra's body for the afterlife. Kendra is now once again, a complete person. The Hawks fly off into the sunset.

Retrieved from "https://heykidscomics.fandom.com/wiki/Hawkgirl_Vol_1_66?oldid=1431342"
Community content is available under CC-BY-SA unless otherwise noted.