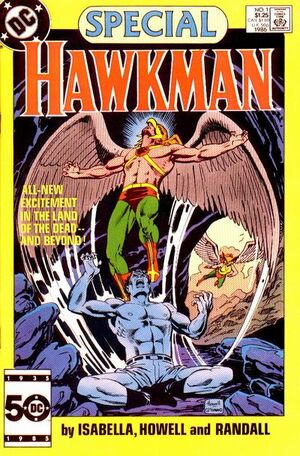 Unable to sleep peacefully after the deaths of the eight Thanagarians in his ship, Hawkman dreams of a nether-world in which they and the Gentleman Ghost reside. He and Hawkwoman are called to the museum by Frazier to investigate a weird manifestation inside, which turns out to be a portal to that same dimension, at the site of Mavis Trent's death. Even after they encounter the Thanagarians, Mavis (who passes on), and the Ghost, he still refuses to believe, until Shayera convinces him to try her mother's ancient means of coming to grips with the death of others, a ritual called "vol." Hawkman returns to Grinder's Bluff, and is performing the rite, when the Ghost appears to Shayera, imploring her to follow her husband. Katar enters the netherworld, and is greeted by Sirrah Jak, who aids him in relieving the souls of his people. Thus, he learns more of Thanagar's recent history. Hyathis did not cure everyone of the plague, many became sterile, and were pressed into invasion-service (they were dispensible), while the others were easily dominated. As he helps the souls in passing over, Hawkman creates stone creatures with his mind, and these attack as the last soul departs, just as Hawkwoman and the Ghost arrive to help. When Shayera's police blaster runs out of power, Craddock steals ancient weapons from a London museum, and the creatures are vanquished. Afterward, the Ghost communicates with the still-lingering spirit of Fell Andar in the cave, explaining that he helped Hawkman in his own bid to steal Earth back from them.

Retrieved from "https://heykidscomics.fandom.com/wiki/Hawkman_Special_Vol_1_1986?oldid=1431347"
Community content is available under CC-BY-SA unless otherwise noted.