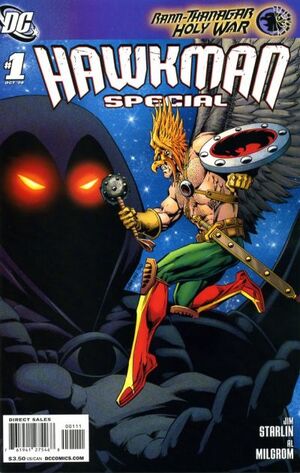 You, Hawkman, are now enmeshed within a web of intricate happenstance.

Hawkman and two Rannian soldiers are traveling across the Desert of Tears investigating the mysterious Eternal Light Corporation Church. A nameless entity that addresses itself as the Demiurge appears before Hawkman and cryptically informs him that he is suffering from an actuality contamination. Hawkman and this Demiurge are destined to encounter one another in the far future, at a point when Hawkman is part of an organization called the Aberrant Six. The Demiurge is elusive with his explanations save to say that everything Hawkman knows of his history on Earth is a lie. The Demiurge shows him images of his first incarnation as Egyptian prince Khufu and his wife Chay-Ara. Hawkman's memories recall the moment when one of Khufu's priests, Hath-Set murdered them both, begetting an endless cycle of death and rebirth for all three. Now, thanks to the Demiurge, the validity of these events is called into question. As the Demiurge takes his leave, he refers to Hawkman by the name of the deceased Thanagarian Hawkman-Katar Hol. Hawkman leaves, pondering the incident.

Retrieved from "https://heykidscomics.fandom.com/wiki/Hawkman_Special_Vol_1_2008?oldid=1431348"
Community content is available under CC-BY-SA unless otherwise noted.