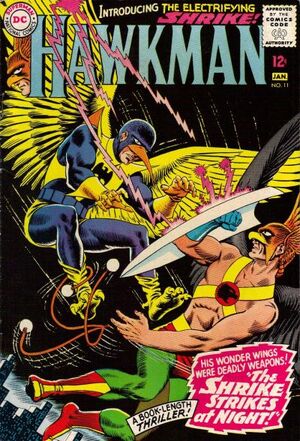 Appearing in "The Shrike Strikes at Night!"Edit

Synopsis for "The Shrike Strikes at Night!"Edit

A new costumed being known as the Shrike, who can fly and has various other super-powers has traveled around the world stealing back items that were once owned by various Aztec tribes. This puts him into conflict with Carter Hall when he breaks into the Midway City museum to steal back some Aztec artifacts.

When fighting back against him as Hawkman and Hawkgirl, the two heroes manage to rope him up. They then hear his story: How years ago his ship crash landed on Earth and he was raised by the people who lived in the jungles of the Yucatan. He explains that they thought him to be a gift from the god Kukulcan, and raised him to believe as such. Hawkman and Hawkgirl realize that he's really an alien from another world and so they take him to their ship. Examining his only possession from when he was a child: a necklace with a star chart on it, they learn that he's from the planet Mizar.

Flying there, they find that the world has some strange power to transport people forward and backwards in time, however it only lasts until the person becomes aware of the phenomenon. This complicates things because the dictator of the planet, Boros Boran, believes them to be invaders when Shrike is transported to the future.

Eventually, after battles with Boran's men, they find a crystal that allows them to free Shrike from the future. He joins their battle and Boran is defeated, it's then revealed that Shrike is really royalty and his parents ship was destroyed. Boran then took over power shortly after, ruling with an iron fist. With Boran defeated, Shrike is left behind to resume his rightful role as the planets leader. Hawkman is intrigued by the whole story and hopes to share it with his fellow JLA member Superman since he could relate to Shrike's story.

Retrieved from "https://heykidscomics.fandom.com/wiki/Hawkman_Vol_1_11?oldid=1429465"
Community content is available under CC-BY-SA unless otherwise noted.