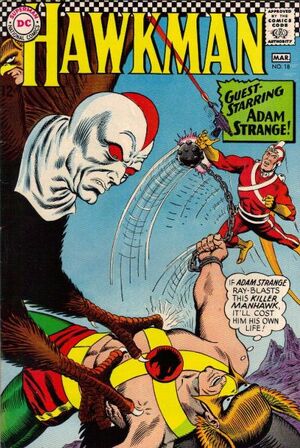 Appearing in "World That Vanished!"Edit

Synopsis for "World That Vanished!"Edit

While Hawkgirl is on Thanagar, Hawkman is surprised by an emergency hyper-space call from her, warning of the escape of the Manhawks, who now threaten their world. When Katar heads home, he finds his planet missing from its normal spacial position. Meantime, on Rann, Sardath has finally found a means to keep Adam Strange on the planet, while eliminating the radiation that Kanjar Ro had placed in his body which meant death if he stayed on Rann more than a year, and with the side-effect of causing death if he returned to Earth. A sub-nucleonetic machine now prevents the Zeta-Beam radiation from wearing off Adam's body, and he is now free to marry Alanna. In the middle of their marriage ceremony, the Manhawks attack Rann, and Adam must lead the planet's warriors into battle. Just as he is about to be blasted by an enemy, Hawkman arrives to save him, taking a blast which unfortunately destroys the Absorbascon. As the Manhawks make Rann's science buildings vanish, Katar explains how to disarm them of their masks. The two adventurers track the Manhawks to the Gorge of Chrystar, where the buildings are kept, and, capturing an enemy, use the Veracikon (a lie detector) on him to discover the plans. Radiation from an unknown source had given the Man-hawks super-strength while in their prison, and after their escape they easily shifted the planet to a new spacial position. When the powers waned, the Manhawks tracked the radiation to Rann, where, unknown to them, Sardath's sub-nucleonetic machine was creating it. Hawkman and Adam Strange return to Ranagar to defend the machine, knowing that its theft will shift Adam back to Earth and instant death. To prevent this, Hawkman takes a duplicate of it to Earth, and there the Manhawks die in Adam's place. He returns to Rann, resolved to find his wife and their planet.

Retrieved from "https://heykidscomics.fandom.com/wiki/Hawkman_Vol_1_18?oldid=1429472"
Community content is available under CC-BY-SA unless otherwise noted.