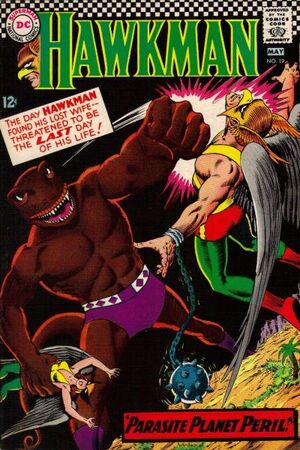 When the captured Manhawk is unable to reveal Thanagar's location, Hawkman and Adam Strange release him, hoping that his homing instincts will lead them there. Katar tracks the bird from his ship, but when it is captured in a space-spider's immense web, he finally has to set the web afire to free it. When the trip is again interrupted by the unyielding pull of a white dwarf star, he shifts all power to his anti-gravity coils; this reveals him to the Manhawk, who attacks. He feigns death, and finally follows the creature to its planet, destroying the creatures' psycho-control device before it can again take over Thanagar. Katar and Shayera are reunited, and he tells her what he's learned of the Manhawk's origins. Their home planet had been destroyed by the Lizarkons of Aptilia, another planet in their star system, who then found that they had a symbiotic relationship with their enemies. All Lizarkons, save one, went into suspended animation until the Manhawks could be brought back, and it was that lone Lizarkon who planted the idea to bring Thanagar and its imprisoned Manhawks to their system in the mind of Falthis Far, leader of the Manhawks. But when they left for Rann, the plan was in jeopardy, so the psycho-control machine was planted on Thanagar to protect the last Manhawk. The Lizarkon brings the Manhawk to Aptilia, and they agree to provide revitalization to the Lizarkons if the Manhawks on Earth are revived, and the Manhawk is given a power belt to amplify his body's effect on the sleeping Lizarkons, which has the added effect of preventing Hawkman and Hawkgirl's weaponry from working. Using their physical prowess, the winged warriors battle the Manhawk and Lizarkon, and prevent the revival of the others. At last, the heroes use the Manhawk's machine to return their planet to its proper orbit around Polaris.

Retrieved from "https://heykidscomics.fandom.com/wiki/Hawkman_Vol_1_19?oldid=1429473"
Community content is available under CC-BY-SA unless otherwise noted.