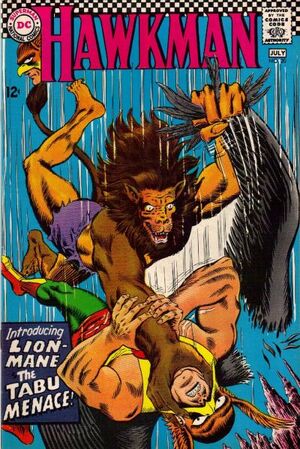 Appearing in "Death of the Living Flame"Edit

Synopsis for "Death of the Living Flame"Edit

On the Aegean island of Tharos, the Living Flame of Kalonika is extinguished and its guard slain. The evidence points to visiting archaeologist Carter Hall, who had been seeking an alternate entrance to the cave which housed the flame. Hawkgirl saves him from the mob, and they determine that their guide Gregory must be responsible. He was the only one who knew they'd discovered a hidden temple behind the flame. They come across him and his men looting the temple, and, as they battle, earthquakes shake the island. The Flame had been the safety valve for gases beneath the island's substrata. By drilling a new gas outlet and igniting it, Katar and Shayera save the island, but also save up the air in the cave, which is now sealed. They unblock the exit and get the looters out, but they light the old flame, and trap Hawkgirl. Hawkman defeats the robbers, saves his wife, and clears Carter Hall's name; he also arranges to buy the temple's treasures for the museum, and to fund repairs of the earthquake damage.

On his way to meet archaeologist Ed Dawson in Iran, Hawkman saves a native lion-hunter from a lion attack, and also learns of Mithra, a meteor "god" that changed the lions in the valley to tame, domesticated beasts. It was forbidden to gaze upon Mithra, but a brave warrior did so. Immediately, the lions became wild again, and the warrior was transformed into a lion-man called Lion-Mane, who killed many men and women of the valley. When he died, the warrior warned that nobody should look at the meteor again. The lions would remain tame until someone broke the taboo and became the new Lion-Mane. When Lion-Mane does attack, a birthmark allows Hawkman to recognize him as Ed Dawson, so he holds back his attack on his friend. When their battle brings them to the vicinity of Mithra, Katar glimpses it but isn't transformed and he smashes the meteor. Touching the stone had caused Dawson's change, and had the rock not been smashed its pulsations would have caused his death. Now he is normal, the lions are tame, and the valley is peaceful, but Katar suspects that the curse on his friend isn't over.

Retrieved from "https://heykidscomics.fandom.com/wiki/Hawkman_Vol_1_20?oldid=1429474"
Community content is available under CC-BY-SA unless otherwise noted.