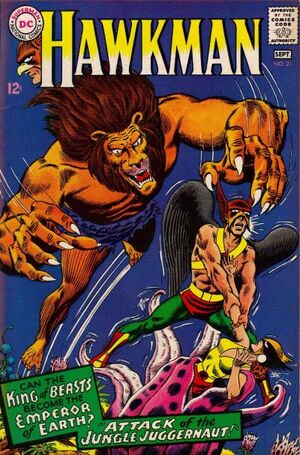 Appearing in "Attack of the Jungle Juggernaut!"Edit

Synopsis for "Attack of the Jungle Juggernaut!"Edit

Carter Hall and Ed Dawson return to Midway City, and he reminds Carter that the museum holds a duplicate of Mithra, which thousands have touched without incident. When Dawson touches it, however, he again becomes Lion-Mane. This time, smashing the meteorite does not return him to normal, and his new form will kill him unless Hawkman can prevent it. Lion-Mane's rage, originally triggered by Katar mistreating another lion, is unleashed when a discotheque exhibits a caged lion, and Hawkman must prevent him from killing everyone inside. Hawkgirl joins him, as Lion-Mane vows that he must fulfill his destiny, and finds a third piece of the meteorite buried in a garden near a flower that a sick boy had been using as a sign of his health. With the meteorite gone, the flower begins to die, and the boy is certain he, too, will die, so Hawkman and Hawkgirl infuse radiation from their detectors, and bring the flower back to life. Lion-Mane, meanwhile, seeks a fourth meteorite in order to gain invulnerability, and when he finds it, the heroes become sealed in a cave. Katar theorizes that the meteorites are actually alien missiles, intended to repopulate planets in the image of the lion-men who would kill other dominant life-forms. However, the first three missiles had been defective, unable to keep the Lion-Manes alive or give them their powers of conquest. When they escape and meet Lion-Mane again, he has an invisible energy-absorbing force field. This they finally break through, but not before he gains his full powers from the fifth meteorite-missile. Lion-Mane's eyebeams begin to transform the terrain to suit his race, until Hawk-man attacks, pulverizing the pieces of the first meteorite in his pockets. Dawson becomes human once more.

Retrieved from "https://heykidscomics.fandom.com/wiki/Hawkman_Vol_1_21?oldid=1686797"
Community content is available under CC-BY-SA unless otherwise noted.