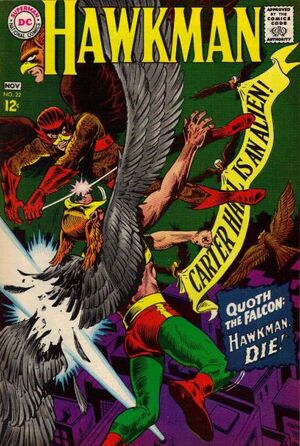 To allay Midway City panic about flying saucers and aliens among the population, Carter Hall agrees to appear on a TV panel show to discuss the matter. On the air, his face begins to melt revealing inhuman skin beneath, and he is chased from the studio as an alien. Changing to Hawkman, he tells Hawkgirl that someone in the makeup department put the chemicals on his face to simulate an alien complexion, and, knowing that they're now under suspicion, he sends her out of town, while armed vigilantes search the city for them. In their absence, a winged criminal called the Falcon sends his army of birds to loot the city. A pigeon attacked by the criminal's birds makes its way to Hawkman, and tells him what's happening. Hawkman returns to Midway City, and pickets the streets as Carter Hall, admitting his alien origin, while Hawkman appears in the sky above. Carter is arrested for disturbing the peace, which convinces the Falcon that he and Hawkman are not the same person. Then Hawkman attacks the criminal. Though the Falcon's lasers slice off his wings, Hawkman prevails, and the bird array is fought off by Hawkgirl with her own birds. They smash the Falcon's controlling device, and capture him. Although the Thanagarian android double of Carter has saved the secret of their dual identities, the people of Midway City now know that the Halls are aliens.

Retrieved from "https://heykidscomics.fandom.com/wiki/Hawkman_Vol_1_22?oldid=1429476"
Community content is available under CC-BY-SA unless otherwise noted.