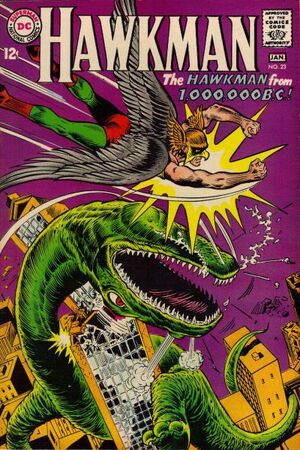 Dinosaurs appear over Midway City, and cavemen loot a bank until driven off by Hawkman and Hawkgirl, save for a fatally wounded pterodactyl which doesn't disappear when the others do. Hawkman learns the story from the prehistoric creature: they were all brought from 1,000,000 B.C. by somebody from the present. The reptile dies before revealing its name, but Hawkman and Hawkgirl follow the dinosaurs' radioactive trail to a closed carnival, where they find the lab of Dr. Malevolo. He attempts to send them back to 1,000,000 B.C. as well. Katar is sent back, acquiring selective amnesia, and battles a mutant dragon. This earns him the worship of the cavemen in the vicinity. He teaches them the secrets of fire and weapons, but then the cavemen, dinosaurs, and Hawkman are all brought back to the present by accident. With Hawkman still amnesiac, the villain orders him to find and put Hawkgirl permanently out of the way. He returns soon after, seemingly successful, and is about to loot a treasure ship, when Shayera shows up alive. He tries to carry out his instructions, but she drains off the radiation causing his amnesia, and they both attack Malevolo. They smash his equipment, thus sending the time travelers home, and take the villain to prison.

Retrieved from "https://heykidscomics.fandom.com/wiki/Hawkman_Vol_1_23?oldid=1429477"
Community content is available under CC-BY-SA unless otherwise noted.