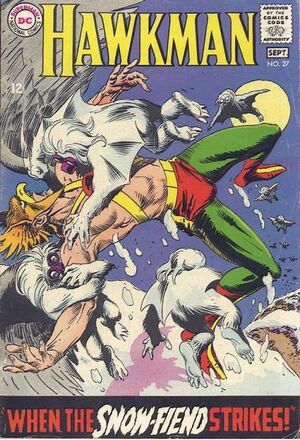 Hawkman and Hawkgirl prevent the Leopard Gang from robbing the Midway City penthouse of Prince Sabul of Tala, who tells them how his country was attacked by Yeti. He is also afraid that they may have to accept military assistance from outside to handle the problem, and that this could lead to occupation. Hawkman agrees to help, although he insists that Shayera stay behind. He is attacked by a Yeti upon arrival, and Hawkgirl, monitoring him from their ship, flies to his aid, as he is taken in by Colo, the last of the true Yeti, who explains that the others are not of his race. The couple tracks the false Yeti to a cave filled with foreign soldiers, and this leads to Sabul's throne room. Hawkman now suspects Sabul has lied to them and that he is the leader of the flying Yeti, but Sabul gathers his people to allow the hero to indict him publicly, an action which backfires when they don't believe him. Hawkgirl disproves the theory when she hears General Kin-Yo's plan to assassinate Sabul and his cabinet with the Yeti, and the attack of the Snow-Fiend reveals it as a robot, guided by Sabul's cousin Vana. General Kin-Yo is killed in attempting to blow up a dam, which would have flooded Tala, as Colo stops him, and Hawkman in turn rescues Colo.

Retrieved from "https://heykidscomics.fandom.com/wiki/Hawkman_Vol_1_27?oldid=1429481"
Community content is available under CC-BY-SA unless otherwise noted.