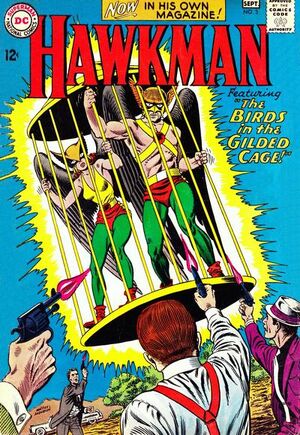 Appearing in "The Fear That Haunted Hawkman"Edit

Synopsis for "The Fear That Haunted Hawkman"Edit

While out taking her dog Penny out for a walk, Shiera Carter witnesses a romantic couple suddenly split up when they girl becomes terribly frightened of the man and runs away. While pondering this, Penny all of a sudden becomes afraid of Shiera and runs off. The whole time, Shiera is unaware that an Egyptian statue is the cause. Returning to Midway Museum, Shiera tries to tell Cater about it when they get a call from the commissioner.

Commissioner Emmett asks the two winged wonders if they can help in capturing a group of criminals called the Sky-Raiders, who have been using flying devices to commit extraordinary robberies. Agreeing to go into action as Hawkman and Hawkgirl, the duo clash with the Sky-Raiders during their most recent heist. However, during the fight, Hawkman's battle with the leader of the Sky-Raiders takes them to the park. Hawkman gets in front of the statues gaze and suddenly becomes afraid of the Sky-Raider leader. The leader manages to escape, and Hawkman torments himself and keeps his fear of this lone man a secret.

To try and make up for it, Hawkman goes into action with almost fevered frenzy, and when the Sky-Raiders strike again Hawkman is determined to get over his fear once and for all. However, when battling the Sky-Raiders (who have advanced their ships to fire energy discs) Hawkman finds that he cannot bring himself to confront the leader due to his crippling fear. Hawkgirl manages to capture him, and the two decide to investigate why Hawkman is suddenly afraid. When they make the connection between Hawkman, Penny the dog, and the young couple, they realize all the events happened in front of the Egyptian statue.

Upon further examination, they realize that there is a prism inside that reflects light out of the statues eyes which cause whatever the light strikes to become afraid of whoever is in proximity. The come up with a way to reverse the process and use it to cure not only Hawkman, but the two lovers who were broken up due to the statues influence.

Appearing in "Birds in the Gilded Cage!"Edit

Synopsis for "Birds in the Gilded Cage!"Edit

While out trying to stop criminals, Hawkman and Hawkgirl suddenly find themselves trapped in a giant bird cage which mysteriously appears. When the crooks manage to escape, they are confronted by an owl-like alien who communicates with a combination of telepathy and flying signals. The creature believes that Hawkman and Hawkgirl were being hunted by the criminals, and created the cage believing them to need protection. After the creature is convinced that they're "safe" it makes the cage disappear and departs.

Hawkman and Hawkgirl go back to Commissioner Emmett's office to tell them the fantastic story, and tell how they were unable to communicate with the creature because it wouldn't understand any method of communication. They then receive word by one of their birds that the mobsters they were after have been spotted again. Going after the crooks, Hawkman and Hawkgirl are once more about to be stopped by the owl-creature again, who believes that they are being hunted. Deducing that the creatures can communicate with flying signals, Hawkman flies in a pattern which tells the creature not to get involved. Conceding, the owl allows then to capture the crooks, and later after explanations are made, the visitor leaves on good terms with the two heroes.

Retrieved from "https://heykidscomics.fandom.com/wiki/Hawkman_Vol_1_3?oldid=1429457"
Community content is available under CC-BY-SA unless otherwise noted.