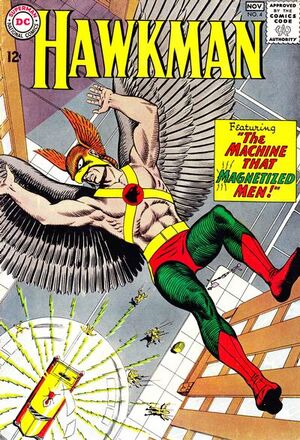 Appearing in "The Girl Who Split in Two!"Edit

Synopsis for "The Girl Who Split in Two!"Edit

When Carter Hall is alerted of two items in the Midway Museum -- A Shang Dynasty statue, and a Celtic Ceremonial cup -- which have suddenly appeared in the museum, he and Shiera decide to check things out as Hawkman and Hawkgirl. Hawkman decides to investigate in China, while Hawkgirl goes to Ireland.

Both heroes find themselves going toe-to-toe with groups of criminals in each country. After both defeat the criminals they come across a strange immobilized girl dressed in stage magicians garb speaking gibberish. Both take these identical girls to their Thanagarian ship above Earth's orbit to try and examine her. There the two find out that they experienced the same thing, and when their machines fail to determine what's wrong, Hawkman realizes that the two girls fragmented speech when put together are real words. Pushing the girls together, they merge into one woman.

The woman reveals herself as Zatanna, the daughter of Zatara the great magician. She tells them that her father had gone missing and that she has been trying to use magic in order to find his location. Learning that he'd been seen both in China and Ireland, she tried to use a spell that would divide her in two so that she can look in both places at once. However, the spell didn't work quite as planned and she found that she was immobilized. She used the last of her magical strength to transport the objects that appeared in the museum hoping it would prompt Hawkman and Hawkgirl to investigate.

Hawkman and Hawkgirl offer to use the Absorbascon to try and learn the location of Zatara, however they find nothing. This leads Zatanna to believe that her father is dead, however Hawkman suggests that may not be so, that he may have amnesia. With renewed sense of purpose, Zatanna teleports away, thanking Hawkman and Hawkgirl for their assistance.

Appearing in "The Machine That Magnetized Men!"Edit

Synopsis for "The Machine That Magnetized Men!"Edit

A series of strange attempted robberies strike Midway City: Hands come out of seemingly nowhere trying to grab expensive artifacts, but fail to pull them through the portal that they are traveling through. This prompts Commissioner Emmett to call in Hawkman and Hawkgirl for help.

Just as soon as they get involved, a strange vehicle appears in the middle of Midway City that has the ability to "magnetize" people. While they are trying to steal priceless paintings, they are attacked by Hawkman and Hawkgirl. However the crooks manage to get away in their vehicle which disappears as quickly as it appeared. As it turns out, these criminals are from the distant future, and have been using the vehicle because in order for items from the past to be brought forward to the future they need to be encased in a vehicle from the future.

When Hawkman and Hawkgirl correctly deduce this for themselves, they thwart the next robbery by throwing paint all over the vehicle. This causes it to be unable to travel forward through time, and Hawkman and Hawkgirl easily round up the criminals. After they are tried and found guilty of their crimes, Hawkgirl muses how these men have been arrested and will spend time in jail before they were ever born.

Retrieved from "https://heykidscomics.fandom.com/wiki/Hawkman_Vol_1_4?oldid=1429458"
Community content is available under CC-BY-SA unless otherwise noted.