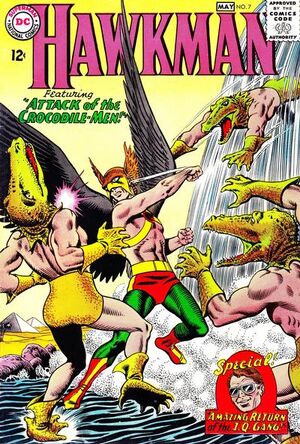 Appearing in "Amazing Return of the I.Q. Gang!"Edit

Synopsis for "Amazing Return of the I.Q. Gang!"Edit

Ira Quimby, who once used a special rock to gain super-intelligence, has found that he now can gain more intelligence due to exposure to sun-light alone. Using his sun enhanced mind, Quimby creates an invisibility device to break out of prison.

Sure enough, once out of jail, Quimby reorganizes his I.Q. Gang and uses his intelligence to create special devices to aid him in fantastic robberies. This gains the attention of Hawkman and Hawkgirl, and the two try to take down their old foe. However, I.Q. is ready for them and has created a remote control flying net which he tries to use to dash the two heroes against the side of a cliff face. However, they manage to break free and track I.Q. back to his hide-out.

In spite of the fact that Quimby has setup various illusion devices (one which renders them invisible, and another which makes everyone's limbs look like they're spread out all over the room), Hawkman and Hawkgirl defeat I.Q. and his gang when they smash the devices creating the illusions.

After turning I.Q. back over to the authorities, they confiscate his high-tech weapons and store them on their Thanagarian ship to insure they don't fall into the wrong hands.

Appearing in "Attack of the Crocodile-Men!"Edit

Synopsis for "Attack of the Crocodile-Men!"Edit

One day at Midway Museum, Shiera Hall is busy cleaning up, when a strange Egyptian statues causes her to be teleported away. Witnessing the spectacle, Carter decides to try and find her as Hawkman. Using a Thanagarian Radiotron to track the energy signature of the teleportation device, Hawkman tracks it to Egypt.

After a brief altercation with some of the locals, Hawkman learns that criminals are using the peoples superstitions and beliefs in Egyptian gods to operate with immunity in the area. Tracking down their base, Hawkman infiltrates the base and finds Shiera. Shiera tells him that the base is operated by a group called the Criminal Alliance of the World (or C.A.W.) and that they were using special teleportation statues to steal artifacts. Hawkman busts up the organization however, during the fight the receiving statue is smashed. After returning to the States, they find the statue there smashed as well, realizing that what happened to one statue would effect the other in the same way.

Retrieved from "https://heykidscomics.fandom.com/wiki/Hawkman_Vol_1_7?oldid=1429461"
Community content is available under CC-BY-SA unless otherwise noted.