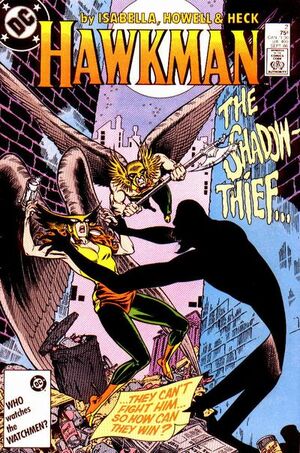 Their alien origins revealed in the city newspaper, the Halls are threatened by immigration officials, but Deputy Commissioner Frazier buys them some time. To get away from a gathering crowd, Carter creates a diversionary gathering of hundreds of birds, as he and his wife fly off to investigate the Hyathis Corporation. When they arrive, they are immediately attacked by the Shadow-Thief and his men, the former now equipped with a means to freeze whatever or whomever he touches. Nonetheless, they handle them all, until the fleeing men blow up a truck. When the smoke clears, Hawkman and Hawkwoman are alone—and under arrest for destroying private property.

Retrieved from "https://heykidscomics.fandom.com/wiki/Hawkman_Vol_2_2?oldid=1431350"
Community content is available under CC-BY-SA unless otherwise noted.