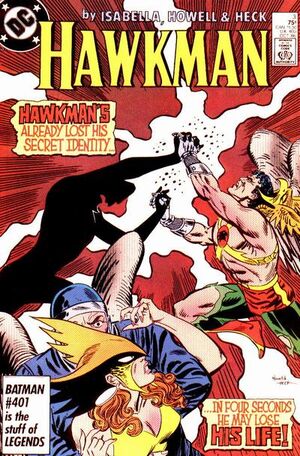 Appearing in "Secrets, Shadows and Sinners!"Edit

Synopsis for "Secrets, Shadows and Sinners!"Edit

Former police commissioner George Emmett appears just in time to get the charges dropped against Hawkman and Hawkwoman by going to the Hyathis Corporation with the threat that if they do not comply they will lose several billion dollars in government contracts. Since Emmett is somehow immune to the effect of the Absorbascon, and his threat is not idle, the head of Kyathis, a Thanagarian named Dervon Ved (alias Mr. Glendon), goes along with these terms. He also turns the Thief over to the police. Hawkman and Hawkwoman are sent to the Michigan warehouse of Hyathis to take him in, fully aware that they are being used. Abandoned by his men, the Shadow-Thief is overcome by the winged duo, who take advantage of his high sensibilities to bright light and piercing sound. Despite his heat-absorbing power, Hawkman defeats him.

Retrieved from "https://heykidscomics.fandom.com/wiki/Hawkman_Vol_2_3?oldid=1431351"
Community content is available under CC-BY-SA unless otherwise noted.