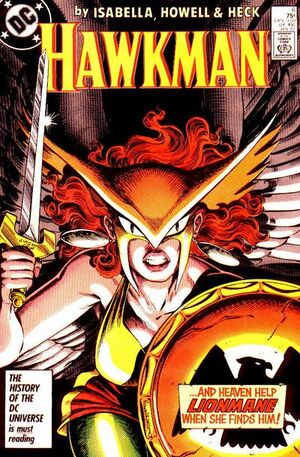 Appearing in "A Lion in the Streets"Edit

Synopsis for "A Lion in the Streets"Edit

Lionmane transforms the Midway City Zoo into a jungle under his mental control and defeats the efforts of the police to stop him. Meanwhile, at the city hospital, Stewart Frazier tries in vain to convince Hawkwoman to leave the side of her critically wounded husband to help in the battle, even as the Thanagarians covertly kidnap Joe Tracy and the gravely injured Corla from elsewhere in the building. Hawkwoman finally joins the fight against Lionmane when the Gentleman Ghost appears and gallantly volunteers to watch over Hawkman in her absence. She finally defeats Lionmane by flying him into the upper atmosphere where the intense cold saps his strength and he changes back to Ed Dawson. Back at the hospital, Hawkman miraculously recovers from his injury.

Retrieved from "https://heykidscomics.fandom.com/wiki/Hawkman_Vol_2_6?oldid=1431354"
Community content is available under CC-BY-SA unless otherwise noted.