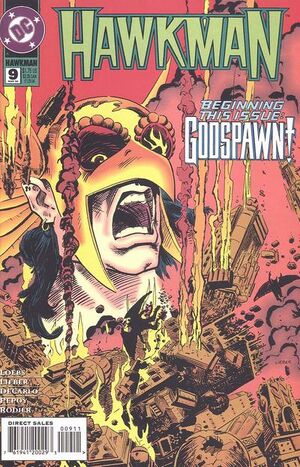 Naomi Carter has a disturbing dream involving the destruction of Thanagar at the hands of a giant shadowy hawk-like figure. Awakening, she requests that Hawkwoman help her send a message to her son.
In Chicago, the Netherworlders struggle with their recent integration into society.Empty citation (help)  While some are finding acceptance and even success, many others are turning to a life of crime. At a bank, Lefty, donning the guise of masked vigilante Bar Sinister , attempts to stop three superpowered robbers. Although he is almost successful, Hawkman is forced to rescue him. In the aftermath, during a discussion with Andrea Lencioni at Police Headquarters, Hawkman receives the note from his mother, requesting that he find a former medicine man named Dennis Baintan.
Hawkman tracks Dennis down, and aids him in a raid on his garage from several other Netherworlders in the Bad Blood gang. Afterwards, as soon as they believe they are safe and begin to talk, they find themselves under sniper fire.

Retrieved from "https://heykidscomics.fandom.com/wiki/Hawkman_Vol_3_9?oldid=1431375"
Community content is available under CC-BY-SA unless otherwise noted.