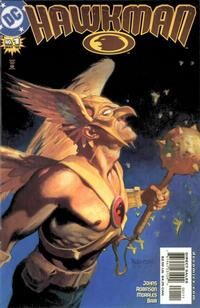 I've kept the fact that we, or I, am aware of my past lives to a small circle. Many law officials would find it difficult to grasp.

While Hawkman assists the JSA in New York, Hawkgirl begins investigating the murder of her parents, which occurred ten years ago. Her inquiry leads her to the Louisiana port city of St. Roch. She is soon joined by Hawkman and proceeds to the Stonechat Museum. They meet curator Oliver Evans, an old friend of the Golden Age Hawks. Oliver tells them that his son Danny is lost in Armitsar Punjab, India. Danny knew Kendra's parents and may be able to help them if they are found.

Meanwhile, St. Roch entrepreneur Kristopher Roderic hires a gang of criminals to go to India to retrieve the Third Eye Of Shiva. He also sends a thug named Bloque to kill Hawkman. Hawkman and Hawkgirl easily defeat the criminal by way of their anti-gravity Nth Metal devices.

Hawkman and Hawkgirl prepare to go to India to find Danny Evans. Hawkgirl makes it clear to Carter, that although she may in fact the reincarnation of his late love, Shiera Hall, she has no interest in pursuing a romantic relationship with him. Carter respects her wishes and declares that they will partners strictly in a professional capacity.

Retrieved from "https://heykidscomics.fandom.com/wiki/Hawkman_Vol_4_1?oldid=1431398"
Community content is available under CC-BY-SA unless otherwise noted.