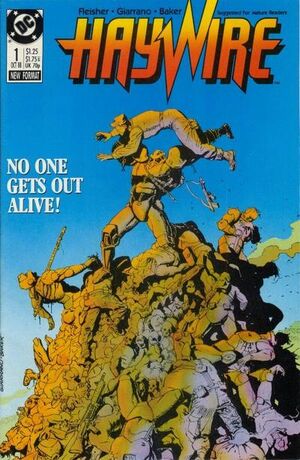 They think I'm dead. We all make mistakes.

A man and his wife are at a barber shop, the man in the chair having his hair cut, when two men burst in and kill everyone with silenced handguns. The killers don't see the man's son, playing with an action figure across from the chair, until the boy screams for his father. They turn and shoot him.

Steven Majorsky tosses and turns in bed as he relives his childhood trauma in the dream. As he sleeps, a caller leaves a message on his answering machine in response to an ad he placed seeking information about the death of his father 15 years ago.

Later in the day, a woman is giving a tour of Elysium Towers, a new multi-million dollar condominium community, when four terrorists take over the place, killing two security guards. The tour guide asks why the terrorists are taking this action and one of them replies that they want Haywire.

Elsewhere, Alex Kingman finishes with a client before going to see his psychiatrist. During the session, Alex tells the doctor about blackouts he has been experiencing lately.

Back at Elysium Towers, the situation has become a media sensation. Newscasters announce that police are asking anyone with information about "Haywire" to call an 800 number.

In the air, a news helicopter is hijacked by a man wearing an individual wearing a green armored suit. A terrorist is about to shoot one of the hostages when the helicopter crashes into building. The terrorists open fire on the helicopter with their machine guns. After they have expended their ammunition. The green armored individual, Haywire, leaps out of the wrecked helicopter and pummels the nearest terrorist. Haywire begins killing the terrorists. One terrorist tosses a grenade and Haywire shoots it with darts, minimizing the explosion. In the midst of the battle, the hostages get to the elevator and escape. The last surviving terrorist sets off a bomb, blowing up the entire top of the building.

Retrieved from "https://heykidscomics.fandom.com/wiki/Haywire_Vol_1_1?oldid=1431482"
Community content is available under CC-BY-SA unless otherwise noted.