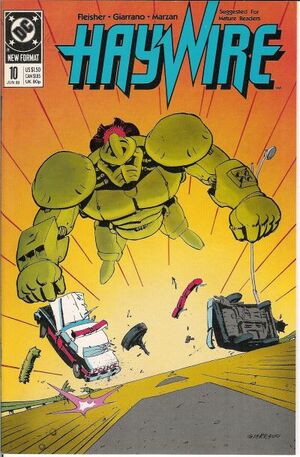 When are you going to make love to me as Haywire?

Appearing in "Love and Death"Edit

Synopsis for "Love and Death"Edit

In Japan, three more ninjas are dispatched to the U.S. to kill Haywire.

Another personality of Alex Kingman/Steven Majorski's steals rubies from a mansion.

The Combine has tracked down Ken Marshall and wants the armor back that his brother in law gave him. Donning the armor, he kills the Combine men.

Alex Kingman takes a gem he found in his pocket to a jewelry store for appraisal. The gem is on the police watch list and the jeweller reports it. When Kingman returns to the shop he is arrested.

Retrieved from "https://heykidscomics.fandom.com/wiki/Haywire_Vol_1_10?oldid=1431491"
Community content is available under CC-BY-SA unless otherwise noted.