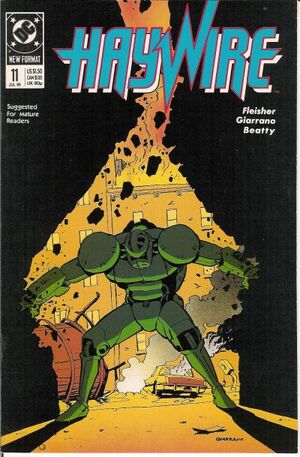 Face it, you walking junk heap. You're finished!

Appearing in "The Incendiary Man"Edit

Synopsis for "The Incendiary Man"Edit

Alex Kingman is in an interrogation room with a cop. The cop gets a little rough and Kingman transforms into Haywire and escapes.

Later, the thief personality is scaling a building when one of the Combine's men shoots him with a rifle, causing him to plummet into the river below.

At the White Lotus' apartment, she is confronted by the other three ninjas from the Black Dragon clan.

Steven Majorski pulls himself out of the river and heads back to the apartment to find Marlene. When he doesn't find her, he goes to the diner where she works. When he learns Marlene is dead, the psychic trauma causes him to transform into Haywire. He trashes the diner, demolishes a building and derails a subway train.

Ken Marshall sees Haywire's rampage on TV, dons his armor and goes out to confront Haywire. As the two fight, one of the Combine's men shoots Haywire with a weapon that causes his armor to teleport away.

Retrieved from "https://heykidscomics.fandom.com/wiki/Haywire_Vol_1_11?oldid=1431492"
Community content is available under CC-BY-SA unless otherwise noted.