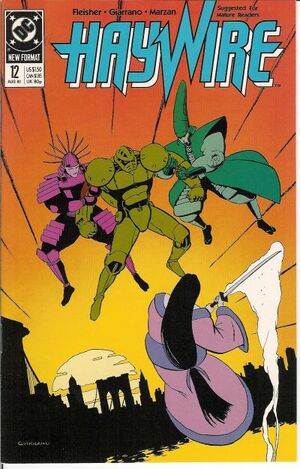 As Steven Majorski plummets toward the ground, Ken Marshall scoops him up and flies away.

At the White Lotus' apartment, she is bound by the three Black Dragon ninjas. They tell her they will destroy Haywire and fly away.

Marshall holds Majorsky hostage and tries to get him to change back to Haywire, so he can get his revenge. Majorsky tells Marshall he doesn't know what he's talking about. Suddenly, Majorsky remembers everything and transforms into Haywire. He knocks Marshall away and flies off.

White Lotus works free of her bonds and suits up.

Haywire begins fighting Marshall and the three ninjas catch up with him and join the fight.

White Lotus flies to Alex Kingman's apartment and is captured by Combine men.

Haywire and Marshall join forces against the ninjas and drive them off. Then Marshall is killed by three Combine soldiers wearing improved psionic armor.

This is a title suggested for mature readers.

Retrieved from "https://heykidscomics.fandom.com/wiki/Haywire_Vol_1_12?oldid=1431493"
Community content is available under CC-BY-SA unless otherwise noted.