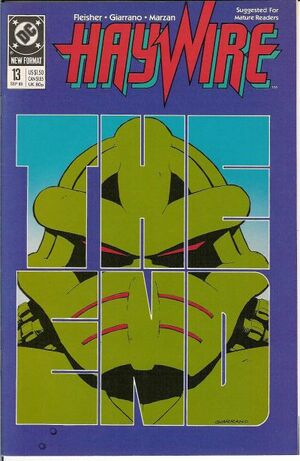 Appearing in "The 'Y' Factor"Edit

Synopsis for "The 'Y' Factor"Edit

Steven Majorski is held captive in a room in Combine headquarters. His father arrives and tells Majorsky how he faked his own death so he could keep his dealings as Combine director secret. He tries to get the location of the armor from his son, but Steven has no memory of where the armor is located.

After the director leaves the room, he meets with his men who tell him that according to their equipment, Steven is telling the truth. The director orders them to cut out Steven's brain and determine how it works so they can get the maximum potential out of their psionic armor units.

At Ken Marshall's apartment he is knocked out and taken captive by two men in black.

The Combine take Black Lotus into the room containing Steven. She kills the two Combine soldiers and is quickly recaptured. Steven is put under hypnosis by a Combine psychiatrist as White Lotus fights free of her captors. They kill her and Steven changes to Haywire, killing all the Combine soldiers. The room's automated defenses roar to life and Haywire rips open the floor and dives through it. He breaks his way down through several levels, putting himself on a collision course with the headquarter's nuclear generator, destroying the entire building.

Retrieved from "https://heykidscomics.fandom.com/wiki/Haywire_Vol_1_13?oldid=1431494"
Community content is available under CC-BY-SA unless otherwise noted.