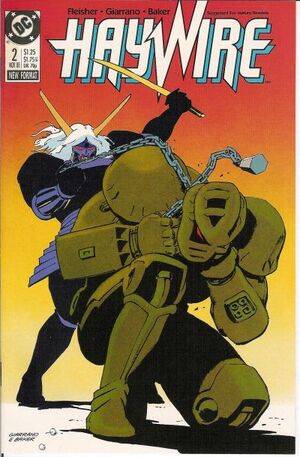 He thinks he's coming in for the kill. He's wrong. Dead wrong.

Opposing gang members are in the midst of a firefight. Haywire stands on a rooftop above them. Haywire jumps down to the street and kills the six fighting gang members. One of the gang leaders, in the back of a Cadillac with a cocaine snorting brunette, orders his driver to flee. The driver complies and Haywire leaps onto the car's hood and shoots the driver through the windshield. The car veers wildly, rolling off a bridge and into the river, drowning the gang leader and the woman.

Alex Kingman, who looks remarkably similar to Steven Majorski, wakes up late and rushes off to work.

Elsewhere, in an underground high-tech facility, men discuss Project Haywire. This organization developed a special psionic suit of armor. After developing the armor they learned that only a certain type of highly repressed personality could use the armor to its maximum potential. So they held auditions. Once they found the right person, a drifter, they began running tests with the armor. During one of the tests, the man wearing the armor went berserk and raged his way out of the building. Now the organization is trying to recover the armor.

At a the diner where his girlfriend Marlene works, Steven eats a meal free, compliments of Marlene.

Back at the shadowy organization, a group of men meet and discuss how they are going to catch Haywire. They have procured the services of Japanese assassins.

Later, Alex Kingman and his girlfriend Caroline take a cab from dinner to a press conference that Alex has to attend as part of his job. At the press conference, prosecuting attorney Mr. Biersten is beheaded by an arrow. On a nearby rooftop, a Black Dragon assassin stands, bow in hand. Haywire arrives and attacks. The assassin uses a weighted chain to bind Haywire, who easily snaps the chain. During the ensuing battle, the roof caves in and the fight is carried indoors. Haywire manages to kill the assassin by snapping his sword and jamming the sharp end in his eye and through his brain.

Retrieved from "https://heykidscomics.fandom.com/wiki/Haywire_Vol_1_2?oldid=1431483"
Community content is available under CC-BY-SA unless otherwise noted.