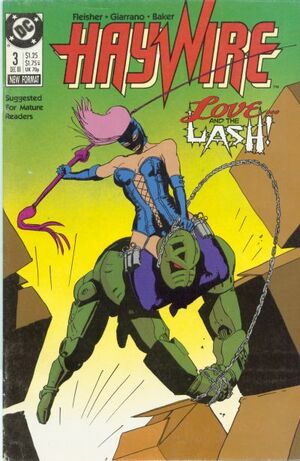 The look of stark terror in his eyes, it gives me strength! Some of them may survive to reach the hospital, unless I do something about it.

At night, Haywire is on a street corner, watching a news report about Haywire in a store display window. He is propositioned by a couple of hookers and turns away, heading down the street. In an apartment above him, a man begins beating his wife.

Haywire appears in the apartment and begins beating up the husband. The wife calls the special number that has been flashing on television to call if sighting Haywire. She finds out there is no reward and hangs up the phone.

At a mansion, a drug deal is going down. Nightlash arrives and tells her employer that police are on the way. The drug dealers begin their escape and Nightlash confronts the cops, taking out a helicopter by wrapping a chain around its rotor.

Later, at Alex Kingman's home, a security service man shows Kingman how the cameras he just set up in his home work.

The following day, Steve meets with a police reporter who was at his father's funeral. A truck rushes in and three thieves jump out of the truck, planning to steal some diamonds. Haywire arrives, picks up the truck and throws it at the thieves. One of the thieves presses a button, calling for backup. Haywire kills the thieves. As night falls, Nightlash arrives. She is the backup. Wielding a laserized whip, she begins fighting Haywire.

After taking a few lumps, Nightlash tosses a smoke grenade and escapes.

The next morning, Alex Kingman awakens with fresh scars on his back, as though he had been whipped.

Retrieved from "https://heykidscomics.fandom.com/wiki/Haywire_Vol_1_3?oldid=1431484"
Community content is available under CC-BY-SA unless otherwise noted.