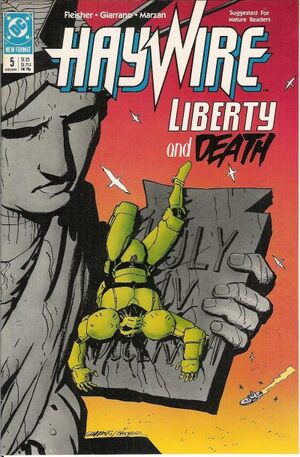 Haywire is in the underground subway tunnels. Haywire beats up a couple punks who are messing with a homeless man. One of the punks gets caught on one of the rails and is killed by an oncoming train.

Later, Alex Kingman is at Dr. Reisman's office and is being put under hypnosis. Reisman snaps his fingers and Steven Majorski's personality comes to the forefront of Alex Kingman's psyche. Confused and enraged, Majorski calls his psionic armor, transforming into Haywire. Haywire smashes the doctor's desk. Haywire leaps through the wall of the building, escaping.

In New York harbor, a drug shipment is arriving by ship. The shipment is guarded by several men wearing psionic armor. Having learned about the shipment from one of the subway punks, Haywire claws his way up the side of the ship, boarding it. Halfway up the ship, Haywire rips open the hull, revealing two armored men playing cards.

They immediately begin fighting and one of the armored men knocks Haywire far away. Haywire fires a missile, blowing up the entire ship and killing all aboard except one armored man who swears vengeance. Haywire recognizes the armor as the man flies away.

Later, the armored man crashes a game show and on camera, demands that Haywire meet him at the Statue of Liberty at a specified time. The time comes and Haywire is there. The armored Central American pins Haywire's arms to his sides by squeezing a tire over his body. Then he tosses Haywire into a trash compactor. It is then that Combine soldiers arrive and chase off the Central American.

Retrieved from "https://heykidscomics.fandom.com/wiki/Haywire_Vol_1_5?oldid=1431486"
Community content is available under CC-BY-SA unless otherwise noted.