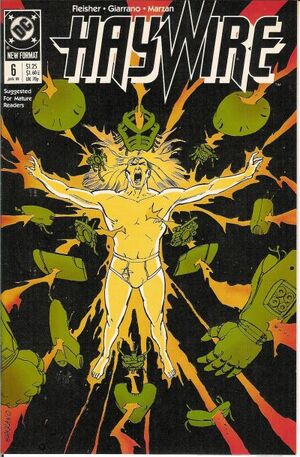 Some of them will die instantly. They're the lucky ones.

Majorsky awakens and is shocked with an electro-probe, causing him to become enraged and call his armor. As soon as the armor assembles, the stasis field is powered up and mechanical arms remove the armor, piece by piece.

After removing the armor, doctors begin surgery to remove the chip in Majorsky's head that allows him to call the armor. The doctor's fail to administer anaesthesia and awaken Majorsky. He calls the armor, steals a flight module and escapes.

In Japan, the Black Dragon ninja clan holds a funereal service for the ninja Haywire killed. Then the dead ninja's sister is charged with killing Haywire in revenge.

Back in California, five men in psionic armor are chasing Haywire through the city. Haywire kills them all, turning a firefighter into a paraplegic in the process.

Retrieved from "https://heykidscomics.fandom.com/wiki/Haywire_Vol_1_6?oldid=1431487"
Community content is available under CC-BY-SA unless otherwise noted.