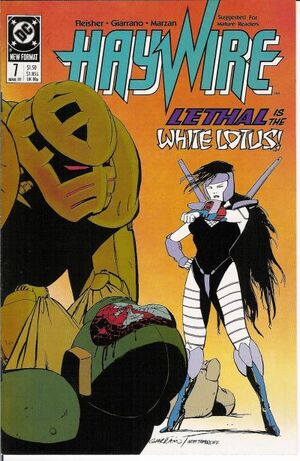 Stowed away on a train, Steven Majorsky dreams of how he infiltrated the Combine to prove his dead father's innocence, donned the psionic armor and began doing tests in the armor at the facility. In the middle of a test, he looked up, saw his father was the director of the Combine and went crazy, breaking out of the facility.

Majorsky wakes up to find two hobos in the train car with him, rifling through his wallet. Majorsky transforms into Haywire and kills the hobos, leaving the train.

In New York, the White Lotus, a ninja from the Black Dragon clan, has arrived in New York. That night, she goes on patrol, looking for Haywire. That night, Steven Majorsky is on the street with his girlfriend, Marlene, when they are confronted by three Combine soldiers. The soldiers kill Marlene and Majorsky transforms into Haywire. As he makes short work of the soldiers, the White Lotus spots him and flies to where he is.

The two fight and White Lotus realizes she is not well enough prepared to kill Haywire. As a result, she retreats.

In a wheelchair at his apartment, former fireman Ken Marshall watches a newscast about how he received a citation for bravery.

This title is recommended for mature readers.

Retrieved from "https://heykidscomics.fandom.com/wiki/Haywire_Vol_1_7?oldid=1431488"
Community content is available under CC-BY-SA unless otherwise noted.