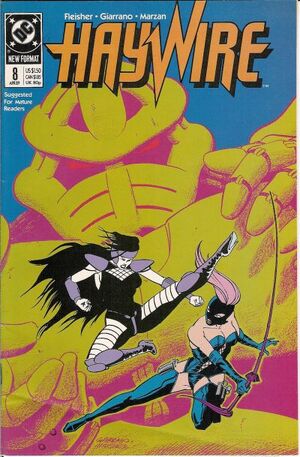 Hate to disappoint you creep, but I don't date the handicapped.

Alex Kingman attends Marlene Isles' funeral. As he bows his head, the tranquilizer dart meant for him finds the pirest's neck instead. As the priest faints, Kingman looks up and sees a couple Combine soldiers. He runs behind a mausoleum, transforms into Haywire and lifts the mausoleum from the ground, tossing it atop the two soldiers.

Later, Alex Kingman meets with White Lotus in her civilian guise for dinner. Elsewhere, Ken Marshall throws darts at a picture of Haywire. He receives a phone call from his brother in law, asking to meet.

Elsewhere, Nightlash arrives in a truck stop bar and beats up a group of patrons.

Later, Caroline, aka Nightlash, is taking a bath when she receives a call from Alex Kingman. She learns that he is seeing a Japanese woman (White Lotus) and jealous, hangs up the phone with great force.

Elsewhere, White Lotus attacks Combine headquarters, killing several officers before escaping. She returns to her apartment to await Alex Kingman. While she is waiting, in a nightie, Nightlash arrives and begins fighting her. Alex arrives at the apartment and Nightlash knocks him out. The two women continue fighting until security arrives and Nightlash escapes by jumping out the window.

Retrieved from "https://heykidscomics.fandom.com/wiki/Haywire_Vol_1_8?oldid=1431489"
Community content is available under CC-BY-SA unless otherwise noted.