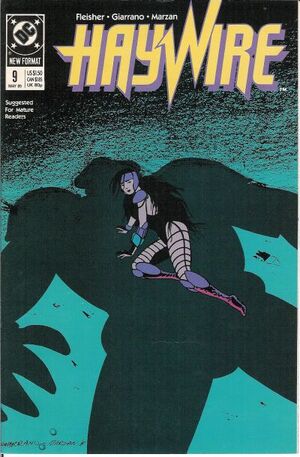 I am not here for the police! Eet is Haywire I want!

Appearing in "Burials and Exhumations"Edit

Synopsis for "Burials and Exhumations"Edit

Alex Kingman is buying some wine at a liquor store when some masked men arrive and hold the place up. Kingman transforms into Haywire and kills the robbers, wrecking the store.

Three armed men and the psionic armored Central American calling himself El Scorpio break into a bank. They escape with money from the bank.

Alex Kingman is at his apartment, when White Lotus arrives in her civilian garb. Kingman lets her in and she reveals to him that she is White Lotus. She tells him how she knows he is Haywire and that she is a ninja assassin who has been sent to kill him. Yet, now she is in love with him and cannot do so.

Meanwhile, an Atlantic City casino is held up by El Scorpio and his goons. Kingman hears about it on a police radio and transforms to Haywire. Haywire, apparently a separate personality, recognizes White Lotus and backhands her. He then takes off for the casino.

Back at Ken Marshall's place, he opens the briefcase his brother in law was carrying to reveal psionic armor.

Retrieved from "https://heykidscomics.fandom.com/wiki/Haywire_Vol_1_9?oldid=1431490"
Community content is available under CC-BY-SA unless otherwise noted.