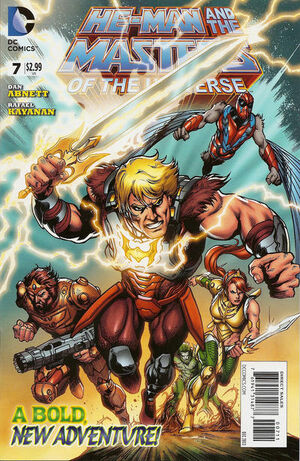 Appearing in "What Lies Within, Part I"Edit

Synopsis for "What Lies Within, Part I"Edit

With Castle Grayskull taken from them, King Randor rallies the Masters of the Universe to take action to strike a blow against their enemies. The king led his men into battle at Sarnscepter, a market town on the plains of Perpetua. Randor had learned that the Evil Horde was seeking something that required vast escavators to recover, somewhere in Sarnscepter, and he had determined that his men would deny the Horde what it sought.

The Horde's activities there were led by Grizzlor, who found his army cut to ribbons by the king's determination that day. He sees this as a challenge to overcome, though, eager to parry the king's attack. He sends his monstroids to box the king's forces in, and in response, Randor deploys more of his own men, having anticipated the flanking. Still, the king is scared.

Fortunately, his forces' spirits are bolstered by the arrival of He-Man and his companions. With little care for why they are fighting, He-Man and his friends join in the battle, knowing that any fight against the Horde is worth joining.

Preparing more of his forces to fight, Grizzlor is surprised by a visit from Hordak himself. Hordak warns that He-Man cannot be allowed to thwart their schemes, and no risks should be taken. He orders Grizzlor to use the Orbital Disruptor - a weapon Grizzlor considers crude and un-warrior-like. Naturally, Hordak insists. Before long, the Horde forces begin to retreat, and He-Man realizes that the reason is not because his side is winning. Something is coming. As the Orbital Disruptor blasts the surface of Eternia, He-Man loses consciousness.

He wakes, hearing the voice of a stranger, warning that even with his new power, He-Man cannot hope to win the fight directly. The stranger introduces himself as Zodac. He explains that while he cannot influence events directly, his new position as an observer has allowed him the opportunity to advise on events both past and future. He warns that He-Man will soon come upon a new means to win victory for Eternia - and he must take it, but it will come at a cost. He must seek out what lies within. With that, Zodac disappears.

Fortunately, Randor and Teela survived the attack, but the king's spirits are low. He admits that, in their absence, Eternia was lost. He has failed his people. He warns that hope wears a strange guise, at times, and may be more dangerous than it appears. Teela realizes that despite his heavy heart, Randor has a plan - but it is one he intends to take alone. His plan is more reckless even than he imagines his own son would dare undertake. He plans to defy the mystical laws of creation, and bring the Sorceress of Castle Grayskull back from death.

Retrieved from "https://heykidscomics.fandom.com/wiki/He-Man_and_the_Masters_of_the_Universe_Vol_2_7?oldid=1435306"
Community content is available under CC-BY-SA unless otherwise noted.