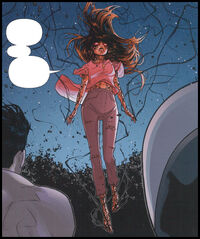 Helen Heart was once a super villain known as "Hella" and was the lover of Hector Hunt. However, Hector was very abusive towards her and she was eventually persuaded by the superhero Sovereign to leave Hector and to live with him. The two soon became lovers and he protected her from any form of imprisonment.

However, Sovereign also became very abusive towards her, to the point where it was worse than it was with Hector.

While living in the same area as the other members of the Meta Legion, Helen tries to get along with them, but at first they are very distrustful of her, especially Alexis, but other spouses do attempt to be friendly to her. Most noticeable friends to her were the robot who pretended to be Ruth Smith and Sara Metzger.

Later Helen was abducted along with Zari and Sara by Hector Hunt. She managed to trick Hector into freeing Sara and she eventually rescued Zari herself. However, Hector caught Helen in the act and she was able to defeat, but only by taking on his evil into herself.