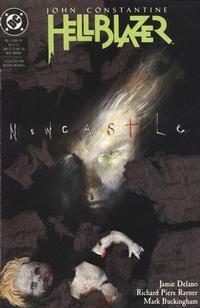 This is where we started it and this is where it'll finish. This is the killing ground where I take my revenge -- just as soon as I work out exactly how.

Appearing in "Newcastle: A Taste of Things to Come"Edit

Synopsis for "Newcastle: A Taste of Things to Come"Edit

John Constantine makes a return at last to the city of Newcastle, looking for some memories. A junk yard now stands where the old Casanova Club was, before the bombing. As he wanders among the rusted out cars, his mind reflects back upon the single most harrowing experience of his life.

He and his friends had been a team. Frank, Judith, Anne Marie, Ritchie, Gary, Ben and John had all met and come together as people with a shared interest in the occult, but they had also had a band.

They had once had a gig at the Casanova Club, with the help of proprietor Alex Logue. Logue was known in occult circles as a sex-and-drugs magician - abusing his power for lust and addictions. After the gig, they had been invited to a party where John was disgusted to see Logue's daughter Astra being incorporated in a way he found inappropriate. When Ray Monde picked up strange energy coming from Newcastle, the band decided to return to investigate.

The crew broke into the Casanova Club in order to get out of the rain.The club had since closed, and Anne-Marie sensed something awful had happened. Ben heard weird sounds coming from behind the cellar door, and so John led them to investigate. The whole crew was sent retching when they saw the carnage that waited at the bottom of the steps; at least four separate heads among the masses of gore. Upstairs, they heard screaming, and rather than stay there with the corpses, the group decided to face whatever waited upstairs.

Upstairs, they found Astra Logue, dancing to a recording of whatever horror likely caused what they saw below. After the recording was stopped, they tried to question the girl, but she was incoherent, and it became clear that something had happened to her. John decided it would be a good idea to try to hypnotize her, and find out what happened. With little prompting, Astra explained that her father sexually abused and raped her, and forced her to attend his orgies in the cellar. When she couldn't take it anymore, Astra had thought hard about the worst possible thing she could. Then, that thing came, and it killed everyone but her.

Knowing that the thing that Astra conjured was still there, John suggested that they must conjure an even more powerful demon to fight the one that Astra brought. Most of the team was wary of the plan, but then they heard Ben's screams from the cellar. They rushed down to find Ben nearly being sodomized by a horrific demonic monster. They yanked him free, and John decided that he was going to perform the summoning no matter what. Judith, Anne-Marie, and Gary agreed to help, but Frank and Ritchie refused. John had Ritchie help Ben sort himself out in the van. Frank, meanwhile, would rig the building to explode if the others don't come out.

Anne-Marie stayed with Astra in a protective circle upstairs while John and Judith prepared with tantric sex. Gary, meanwhile, searched for a black cat - merely as an excuse to get him out of the way for a while. After performing the ritual, John was annoyed to find that it doesn't appear to work. Grumpily, they decided to let Frank take care of it his way.

Meanwhile, Anne-Marie was visited by a vision of John Constantine, tempting her to leave the protective circle. The vision played on her lust for John, but once she left the circle, she was showered with acid, and the vision thrust her out the window.

John tried the ritual again, but was interrupted by Astra herself, having found her way downstairs. She claimed that they had called her down to them, though they hadn't. The girl began to call on her demon, but the trio could not stop her, because it would be unsafe to leave their protective circle. All they could do was watch what was to happen next.

Instead of the demon devouring the little girl, they watched as Astra ripped the creature to pieces. Their ritual had worked, indirectly. Astra was now host to a demon. John attempted to command the demon to leave Astra unharmed, but it responded that it had no obligation to do so, despite having come at his call and dispatched the monstrosity. John screamed for the demon to leave the girl, and it complied, as Astra began to vomit out a terrible mass of writhing flesh. It grew and grew until it stood before them, a horror to behold. Calmly, Constantine ordered his companions to escape while they could.

The demon mocked John, pointing out that he had failed to place an appropriate name for the demon he had called, which made the invocation lack the weight of magical imperative. The demon merely came in order to chastise him. In exchange for coming and doing as John asked, the demon chose Astra as his compensation, with no negotiation possible. However, John was given the opportunity to accompany her down to Hell.

Meanwhile, the rest of the crew decided it was time to set the building ablaze, thinking John wasn't going to come back. When the fuse was lit, John and Astra felt the world around them shaking. He urged the girl to run, but in the confusion, John found himself running out the front door of the club. To his friends' horror, only Astra's arm had left the building with him. As the building burned to the ground, the demon's voice warned that it would one day come for each of their souls.

It has been ten years since that day. John knows that all blame for what happened lies with him. Each of his friends had parted ways changed by those events. Anne-Marie became a nun, Ben got his stutter, Gary turned to drugs, Judith began working with children, and Frank started biking around the world. One by one, the demon took each of them from him. But now, that demon has made a mistake. It told him its name: Nergal. And John is going to get his revenge, somehow.

Retrieved from "https://heykidscomics.fandom.com/wiki/Hellblazer_Vol_1_11?oldid=1433517"
Community content is available under CC-BY-SA unless otherwise noted.